Telegram-iOS uses reactive programming in most modules. There are three frameworks to achieve reactive functions inside the project:

This post focuses on SwiftSignalKit to explain its design with use cases.

Signal is a class that captures the concept of “change over time”. Its signature can be viewed as below:

To set up a signal, it accepts a generator closure which defines the ways to generate data(<T>), catch errors(<E>), and update completion state. Once it’s set up, the function start can register observer closures.

Subscriber has the logics to dispatch data to each observer closure with thread safety consideration.

A subscriber is terminated when an error occurred or it’s completed. The state can not be reversed.

A rich set of operators are defined to provide functional primitives on Signal. These primitives are grouped into several categories according to their functions: Catch, Combine, Dispatch, Loop, Mapping, Meta, Reduce, SideEffects, Single, Take, and Timing. Let’s take several mapping operators as an example:

The operator like map() takes a transformation closure and returns a function to change the data type of a Signal. There is a handy |> operator to help chain these operators as pipes:

The operator |> might be inspired by the proposed pipeline operator in the JavaScript world. By the trailing closure support from Swift, all operators can be pipelined with intuitive readability:

The class Queue is a wrapper over GCD to manage the queue used to dispatch data in a Signal. There are three preset queues for general use cases: globalMainQueue, globalDefaultQueue, and globalBackgroundQueue. There is no mechanism to avoid overcommit to queues, which I think could be improved.

The protocol Disposable defines something that can be disposed of. It’s usually associated with freeing resources or canceling tasks. Four classes implement this protocol and could cover most use cases: ActionDisposable, MetaDisposable, DisposableSet, and DisposableDict.

The classes Promise and ValuePromise are built for the scenario when multiple observers are interested in a data source. Promise supports using a Signal to update the data value, while ValuePromise is defined to accept the value changes directly.

Let’s check out some real use cases in the project, which demonstrate the usage pattern of SwiftSignalKit.

iOS enforces apps to request authorization from the user before accessing sensitive information on devices, such as contacts, camera, location, etc. While chatting with a friend, Telegram-iOS has a feature to send your location as a message. Let’s see how it gets the location authorization with Signal.

The workflow is a standard asynchronous task that can be modeled by SwiftSignalKit. The function authorizationStatus inside DeviceAccess.swift returns a Signal to check the current authorization status:

The current implementation is piped with another then operation, which I believe it’s a piece of copy-and-paste code, and it should be removed.

When a LocationPickerController is present, it observes on the signal from authorizationStatus and invokes DeviceAccess.authrizeAccess if the permission is not determined.

Signal.start returns an instance of Disposable. The best practice is to hold it in a field variable and dispose of it in deinit.

Let’s check out a more complex example. Telegram allows each user to change the unique username in UsernameSetupController. The username is used to generate a public link for others to reach you. 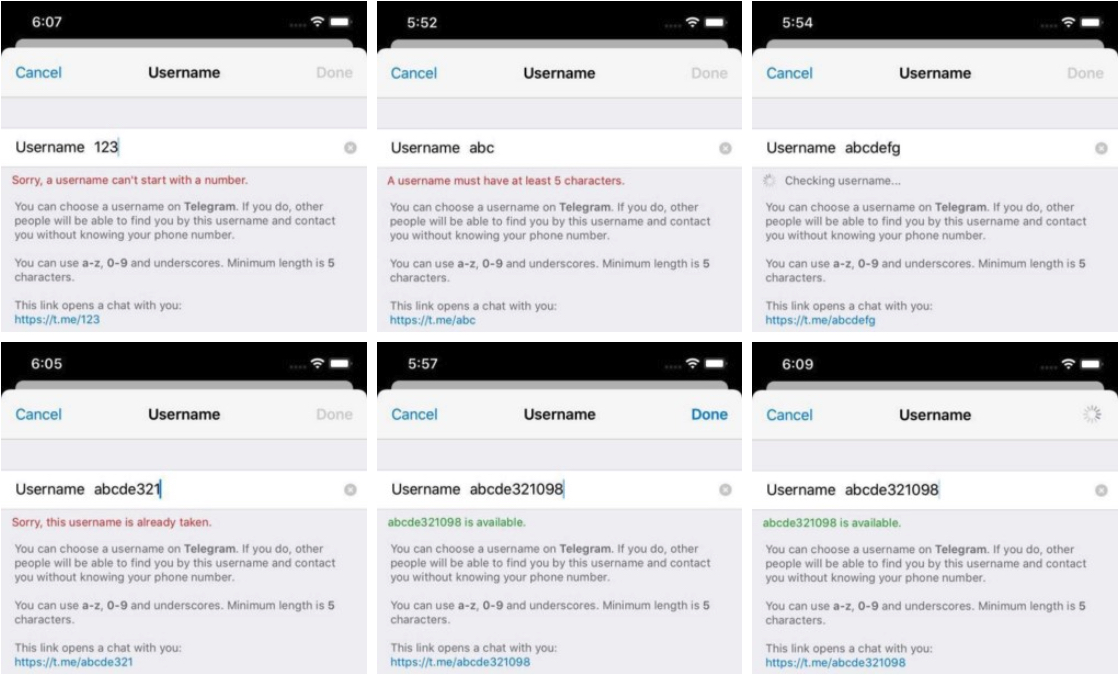 The implementation should meet the requirements:

There are three data sources that could change over time: the theme, the current account, and the editing state. The theme and account are fundamental data components in the project, so there are dedicated Signals: SharedAccountContext.presentationData and Account.viewTracker.peerView. I’ll try to cover them in other posts. Let’s focus on how the editing state is modeled with Signal step by step.

#1. The struct UsernameSetupControllerState defines the data with three elements: the editing input text, the validation status, and the updating flag. Several helper functions are provided to update it and get a new instance.

#2. The state changes are propagated by statePromise in ValuePromise, which also provides a neat feature to omit repeated data updates. There is also a stateValue to hold the latest state because the data in a ValuePromise is not visible outside. It’s a common pattern inside the project for a value promise companied with a state value. Exposing read access to the internal value might be an appropriate improvement to ValuePromise IMO.

#3. The validation process can be implemented in a piped Signal. The operator delay holds the request for a 0.3 seconds delay. For fast typing, the previous unsent request would be canceled by the setup in Step 4.

#4. A MetaDisposable holds the Signal, and updates the data in statePromise and stateValue when text is changed in TextFieldNode. When invoking checkAddressNameDisposable.set(), the previous one is disposed of which triggers the canceling task inside the operator delay in the 3rd step.

TextFieldNode is a subclass of ASDisplayNode and wraps a UITextField for text input. Telegram-iOS leverages the asynchronous rendering mechanism from AsyncDisplayKit to make its complex message UI smooth and responsive.

#5. The operator combineLatest combines the three Signals to update the controller UI if any of them is changed.

SSignalKit is Telegram-iOS’s solution to reactive programming. The core components, like Signal and Promise, are implemented in slightly different approaches from other reactive frameworks. It’s used pervasively across the modules to connect UI with data changes.

The design encourages heavy usage of closures. There are many closures nested with each other, which indents some lines far away. The project also likes exposing many actions as closures for flexibility. It’s still a myth to me on how Telegram engineers maintain the code quality and debug the Signals easily.