OpenAphid-Engine was born as an exploration project at the first half year of 2012 when I quit my day job. Its mission was to figure out the most efficient way to integrate a full JavaScript engine within native iOS/Android games.

The development went perfectly well as it even outperformed the commercial solution of ngCore from DeNA. I really enjoyed the pleasure brought by tackling technical problems to make the engine support both iOS and Android with high performance. I also gained precious experiences after studying source codes of JavaScriptCore and other great open source projects.

But I failed to find enough time working on it after I started a long travel plan with my family at Aug 2012. After careful consideration, I have decided it’s time to sunset the project as I’m going to find a long-term job again. For developers who are also interested at using a JavaScript engine within native apps, I’ll write two or three more articles in these days to share some pieces of knowledge collected during the development of OpenAphid-Engine.

v0.2.1f is the final update of OpenAphid-Engine. The release comes with bug fixes for iOS6 support and performance improvements on Android. The iOS demo project has been revamped by merging separated demos into one single app. It also illustrates the ability to use CoffeeScript and TypeScript to write games with OpenAphid-Engine. 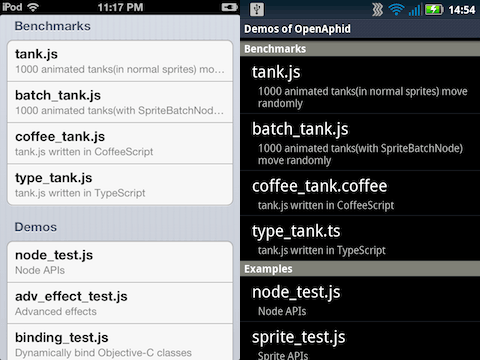 The main source codes of OpenAphid Runtime and AJ (the modified JavaScript Engine) have been moved into folders named DISCONTINUED.

I appreciate everyone’s support to OpenAphid-Engine. And special thanks to Wanna Dobre, who kindly designed the wonderful aphid character for the project and for this blog site.