Telegram-iOS builds most UIs upon AsyncDisplayKit. It’s folked as a submodule of the project, in which many features have been removed and some of them are re-implemented in Swift. This post talks about the component structure and the UI programming pattern in the project.

AsyncDisplayKit is an asynchronous UI framework that was originally born from Facebook. It’s adopted by Pinterest and was renamed to Texture in 2017. Its core concept is using node as an abstraction of UIView, which is a bit similar to the ideas from React Virtual DOM. Nodes are thread-safe, which helps move expensive UI operations off the main thread, like image decoding, text sizing, etc. Nodes are also lightweight, which allows you to NOT reuse cells in tables and collections.

As illustrated in the diagram, Telegram-iOS keeps around 35% code that’s denoted in blue boxes and removes the others from the official version.

Basically speaking, Telegram-iOS keeps a minimal set of the core node system and then extends it with several hundreds of node subclasses. The code spreads inside submodules like Display, TelegramUI, ItemListUI and others that support the main Telegram UI features. 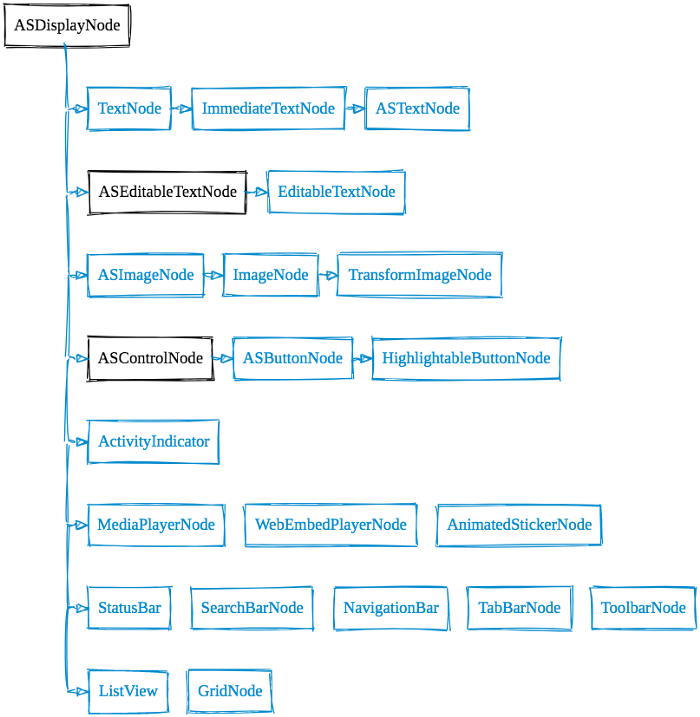 There are a few node classes as fundamental blocks to build the app’s user interface. Let’s check them out as listed in the diagram.

An arrowed edge means the right node is a subclass of the left one. Nodes at the same level without edges means they share the same parent class as the leftmost one.

TextNode leverages CoreText to render an NSAttributedString. It has a method calculateLayout to compute a line based text layout and overrides the class method draw to render the text. A public class method asyncLayout is present to invoke layout computation asynchronously and cache the result. It’s the callee’s responsibility to invoke asyncLayout by design. Otherwise, it wouldn’t render anything as the cached layout is nil. It’s also great that the implementation supports RTL and Accessibility.

ASTextNode simply updates the layout on setting the property attributedText. It’s not the same one in AsyncDisplayKit project although it shares the same class name.

ASImageNode renders a UIImage and uses the image size as its node size. Again it’s not the same class in the official project.

ImageNode accepts a Signal to set the image content asynchronously. It’s solely used by AvatarNode although its name looks common.

TransformImageNode is the most widely used class for asynchronous images. It supports an alpha animation on changing images and supports color overlay.

ASButtonNode models a button with an image and a title that have three states: normal, highlighted, and disabled.

HighlightableButtonNode adds a highlight animation when a button is in tracking.

Telegram-iOS implements a rich set of components to support different media types. This article just takes a peek at it. It’s worth writing a dedicated post in this series, including FFMpeg integration, in-app video playback for 3rd-party video sites, sticker animation, etc.

MediaPlayNode is a node class in the submodule MediaPlayer to render video frames on AVSampleBufferDisplayLayer.

WebEmbedPlayerNode plays a video that’s inside a web page by embedding a WKWebView. It supports videos from Youtube, Vimeo, Twitch, etc.

SearchBarNode, NavigationBar, TabBarNode, and ToolbarNode mimic the features of the UIKit counterparts. It also eliminates the impact of the inconsistent behavior across OS versions, which is always an unpleasant issue to patch as UIKit internals are not visible to developers.

ListView is one of the most complex node classes designed for a scrolling list. It leverages a hidden UIScrollView and borrows its pan gesture to get the scrolling behavior as what we learned from WWDC 2014. Besides managing the visibility of items in a list no matter it’s small or huge, it provides additional neat features, such as convenient item headers, customizable scroll indicators, recording items, over scroll nodes, snapping to bounds, etc.

ViewController makes UIViewController work as a container of node hierarchies. Unlike the official node controller class ASViewController, it doesn’t have features like visibility depth and intelligent preloading.

Each ViewController manages the node hierarchy by a root content node, which is stored in the displayNode property of the class. There are functions loadDisplayNode and displayNodeDidLoad to achieve the same lazy view loading behavior as what we are familiar with in UIViewController.

As a base class, it prepares several shared node components for subclasses: a status bar, a navigation bar, a toolbar, and a scrollToTopView. There are also convenient properties to customize its navigation bar which is still a cumbersome problem for a normal UIViewController.

TabBarController is only used in the root screen, so it’s a subclass of ViewController instead of UITabBarController since there is no need to keep the APIs. The same rule applies to ActionSheetController, AlertController, and ContextMenuController. The implementation perfectly covers details inside the system view controllers, the user experience is almost identical to users IMO.

ItemListController is equivalent to UITableViewController by managing a ListView. It also supports custom overlay nodes, search view, and reordering items.

The Flexbox layout system in AsyncDisplayKit is replaced by a mixed layout mechanism:

I’m impressed by Telegram’s approach to integrating AsyncDisplayKit. It rebuilds the whole family of UIKit components upon nodes for efficiency and full control. The chat message list feels fluid on old devices although the bubbles UI is complex to render. There are few codes to deal with the system upgrade debt, which always costs some “happy time” from most engineers after WWDC every year. Let’s see what might be broken after the first online WWDC in two weeks.