Bubbles is a type of UI that‘s almost an integral part of our daily life. It’s a trivial job if a message is either a piece of plain text or one image file. The problem in Telegram is difficult as there are many message elements, such as texts, styled texts, markdown texts, images, albums, videos, files, web pages, locations, and more. It gets more challenging as one message can have almost multiple elements of arbitrary types. This article shows how Telegram-iOS builds message bubbles upon its asynchronous UI framework.

ChatControllerImpl is the core controller that manages the message list UI. Its content ChatControllerNode composes the UI structure with the following major nodes:

As a subclass of ListView, ChatHistoryListNode renders a list of messages and other information nodes. It has two UI modes: bubbles and list. The mode bubbles is used for normal chats and list is used in the peer info panel to list chat history per type as Media, Files, Voice, etc. This post only talks about the mode bubbles.

A chat message list places the latest message at the bottom and the vertical scroll indicator starts at the bottom too. It’s actually an inversion of the common list UI on iOS. Telegram-iOS uses a similar UI transformation trick that’s present in ASTableNode of AsyncDisplayKit. ChatHistoryListNode is rotated by 180° using the property transform of ASDisplayNode, then all content nodes are rotated too.

The following screenshot demonstrates what it looks like after applying the transformation step by step: 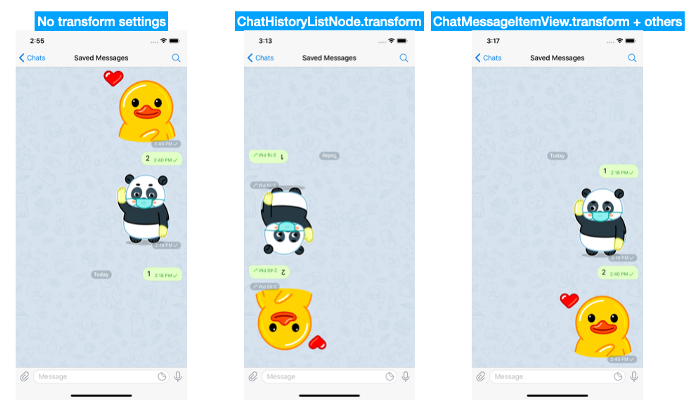 ChatControllerInteraction is a data class that maintains 77 action callbacks for ChatControllerImpl. It’s passed through items to enable them trigger callbacks without a reference to the controller.

The structure of ChatMessageItemContent is interesting. It’s an enum that can be either one message or a group of messages. IMO, it could be simplified to just .group as .message can be expressed by a group with one element.

Message works with two protocols MessageAttribute and Media to describe content elements inside a message.

An instance of Message always has one text entry and some optional MessageAttribute. If attributes has an entry of TextEntitiesMessageAttribute, an attributed string can be constructed via stringWithAppliedEntities. Then a rich formatted text can be rendered inside a bubble.

To summarize, Message is basically an attributed string with several media attachments, while ChatMessageItem is a group of Message instances. This design is flexible to represent complex message content and keep backward compatibility easily. For example, a grouped album is expressed as an item that has several messages, while each has a media of TelegramMediaImage.

ChatMessageItem implements nodeConfiguredForParams to set up bubble nodes to match the data. If we look into the code, it has some rules on the item structure. 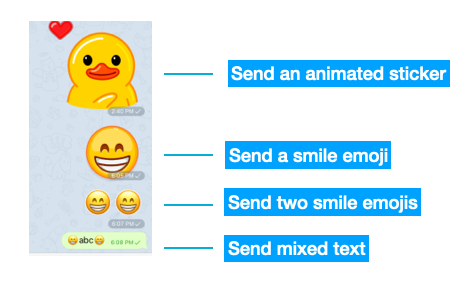 ChatMessageBubbleItemNode checks through an item and builds the sub-nodes by mapping the data to 16 subclasses of ChatMessageBubbleContentNode. contentNodeMessagesAndClassesForItem is the core function that maintains the mapping logic:

The layout of bubbles is driven by the asynchronous layout mechanism of ListView. The graph above shows the invocation flow of the most important layout methods. During my test on an iPhone 6s with iOS 13.5, the FPS is able to keep above 58 which is better than other apps that have long and complex list UIs. It definitely proves AsyncDisplayKit is a good choice for Telegram’s scenario.

One thing to note is that ListView doesn’t cache layout results. If your device is really slow, you would see empty cells during scrolling.

This post briefly explains the data model and UI structures for message bubbles in Telegram-iOS. The data structure is flexible for complex messages, which is a good reference to check if you start to design your own messenger. I encourage you to dive into the code following my introduction as more details are not covered here.